Gokarna you’ve stolen a piece of my heart, we loved your beaches, sunsets and street art. Our little thatch hut had such calming powers, surrounded by beautiful hibiscus flowers. 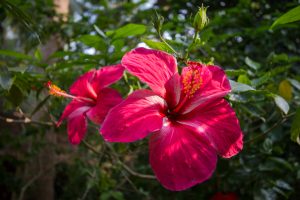 Nirvana Cafe, was the place where we stayed, So relaxing and peaceful for a couple of days. Talking to guests about where they were traveling on, every night watching the red setting sun. 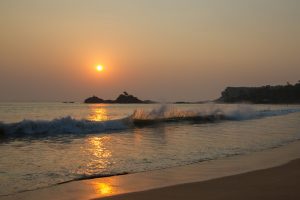 We arrived on a Saturday, what a mistake! The beach full of families and large groups on weekend break. So busy and bustling, noisy and loud, we were expecting a chilled out break from the crowd. But by Monday the calm that we sought was restored and we found the part of the beach we adored.

Om beach itself has soft white sands, jewellery sellers walk its length, their wares in their hands. The sea was strong and surf was rough, so I didn’t swim but Mike is more tough.

Frogs, Gekos, spiders, beach dogs and cows, there’s plenty of nature and animals to be found. I wasn’t best pleased with them gate-crashing our hut, but I didn’t mind too much so long as they stay put. 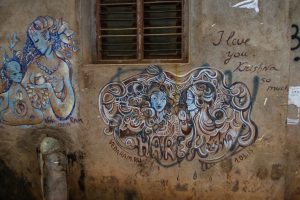 Gokarna town is like most near the beach, many small shops, cafes and stalls on the street. Upon certain walls, fun graffiti is found and singing from the temples fills the square with great sound.

I had a few issues with drawing out money, I was lucky, I had Mike so I didn’t have to worry. But Halifax bank has left others stranded, when they can’t draw out cash and are left empty handed!

Gokarna is fabulous, it’s really a must, easily reached by train or by bus. Hampi was next for us on the list, but certainly Gokarna shouldn’t be missed!

WHO we stayed with: We spent our first night in a hotel called Namastay Cafe. Having arrived late in the day, it was getting dark and the beach was so busy with weekend holidayers that there were only two rooms left! We had a look around, choosing the better of the two, but sadly it was the most depressing place we have stayed in to this day!

There were no windows so it was dark, damp and dingy. The bed was hard and the sheets stained; there was a mosquito net over the bed that had never been taken down or even shaken, as it was covered with dead bugs and we had to patch the holes up ourselves with medical tape from our first aid kit. The bathroom was dirty and there were insects eating the woodwork in the bedroom from the inside out. Needless to say we checked out first thing in the morning and walked along the other side of the beach, finding a haven in Nirvana Cafe (sorry, there is no link, just wing it and arrive!).

Nirvana couldn’t have been more different from Namastay. The beach huts were light, airy and spacious. The little sitting area outside had table, chairs and enough room to hang up our hammocks. The pathways were lined with sand and pretty, patterned brick work which enclosed small garden areas covered in Hibiscus flowers and brightly coloured plants. There was a big open restaurant right on the beach, decorated in colourful silks and serving a range of good food (Indian, Israeli & European). We had our own bathroom at RS800 but for a cheaper rate (RS500-600) there were rooms with shared showers and toilets. The atmosphere was relaxed and cheery, just like our surroundings, and we met some lovely people, sharing ideas and recommendations for further travels.

WHAT we did: Read, write, swing in hammocks, chat to other travellers, swim, watch people playing extreme frizbee, look at all the jewellery on offer from the hawkers, eat, drink and be merry! We stayed on our little bliss of Om beach but ventured into Gokarna town a few times. A Tuktuk from the top of Om beach cost Rs150-200 each way. There were some even more secluded beaches just round the corner from where we were on Om, Paradise and Hells beach; take your own supplies as there’s not a lot there.

WHERE we ate: We ate in the restaurant at Nirvana Cafe. The food was good, it was a reasonable price and it was just too easy.

WHEN: 28th October- 2nd November. Peak season was not yet in full swing but the beaches were busy, especially on a weekend and hawkers were already prowling for sales. We enjoyed the calm before the storm.

WHY: Because it’s beautiful and calming and I’ve never felt more relaxed. Go on, you know you want too!

If you're still not sure if NOMAD are the right people to look after your brand development, design, communications, success tracking, photography, or all of the above, let's have a chat. It's always good to talk!

Get in Touch, we'll get right back to you!

Give us a call

Web design by us!